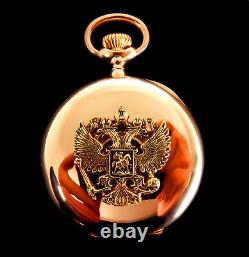 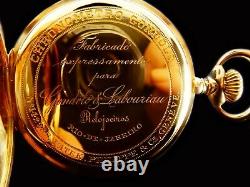 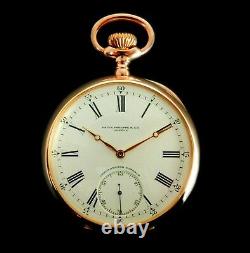 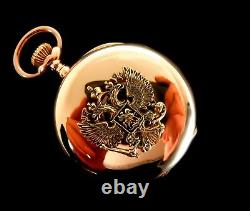 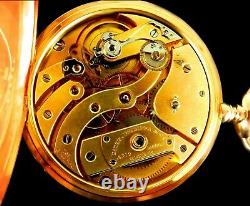 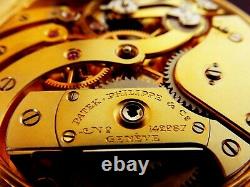 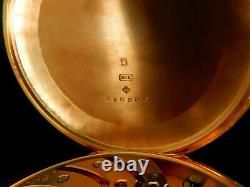 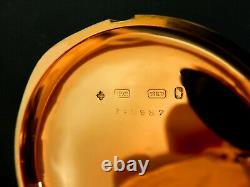 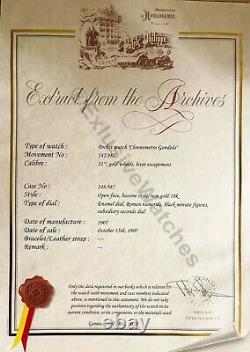 Up for sale is a Rare Beautiful Antique High Grade Mint. Patek Philippe "Chronometro Gondolo" in 18K Rose Gold Case with Russian. Imperial coat of arms - Double Headed Eagle on the back.

Once belonged to Russian royal family. The movement has a serial number. 142987 which dates it to be manufactured in 1907. SUPER CLEAN, EXCEPTIONALLY NICE, VERY SCARCE. The Glass Enamel Dial, Hands and Glass Crystal are in immaculate mint condition please see the pictures.

The 18K Rose Gold Case is in Excellent Mint condition. The Watch size is 21' with Jewels in Gold settings, Gold Train, Gold balance screws. It's Stem Wind and Stem set, Adjusted to Positions, Temperature. The watch was recently serviced, running STRONG and keeping an excellent accurate time. Please look closely at the pictures as they part of the description. One of the best known models of Patek Philippe pocket watches is the Chronometro Gondolo. Here are just a a few of the movement's exceptional attributes. A unique, caliber created specially for Gondolo and found in no other Patek Philippe timepiece. 9K rose gold wheel trains for enhanced function and beauty. Straight line lever escapement "à moustaches" ("with mustaches"). Enhanced micrometric regulator for precision regulating of the timing fast or slow. Mainspring barrel arbor fitted with a square indentation for releasing (unwinding) the mainspring. Today's offering showcases this Art Deco matching numbers Patek Philippe Chronometro Gondolo. It has original parts down to the case. Dial, hands, winding crown, and bow! It is in extraordinary pleasing original mint condition. The case is original in excellent mint condition with Russian Imperial Eagle on the cover. It has never been personalized. It's dial is original and in perfect mint condition.

It's wonderful movement is running strong and true. One of our watchmakers has freshly disassembled the movement down to the last screw and cleaned and oiled it. After more than 100 years, it is still keeping extraordinarily accurate time.

The history of award watches. Most often, a small gold pocket watch was presented. They had a lid covered with enamel with an engraved portrait of the emperor. In a special cartouche, the masters made a dedication, but the name of the owner was not always written there. During the reign of Nicholas I, Russia achieved certain successes in military affairs, so watches were most often presented to representatives of the nobility and military leaders.

A small number of watches have come down to us, so they are considered almost priceless among collectors and jewelers. All watches, which were presented to the representatives of the nobility, bore the image of the coat of arms or the portrait of the emperor.

During the reign of Alexander II, which lasted from 1855 to 1881, watches were donated even more frequently. In addition to gold watches, masters made silver or gilded ones.

They always depicted the coat of arms of the state or a portrait of the emperor. This watch could be given as a gift not only to the nobility, but also to the army officers. There was no longer a portrait of the tsar on the watch, but the coat of arms. The acquisition of "watches from the tsar" and the organization of their solemn presentation was handled by the Cabinet of His Imperial Majesty.

All the watch suppliers for the Cabinet were Swiss. The three largest "wholesale" suppliers were H.

A paradox: the premium watches were made as luxurious and intricate as possible, but the watches worn by the royal family were as simple and lapidary as possible: without painted miniatures, diamonds and curls. Movements with a complex structure and functions were appreciated in them. If you manage to see such a watch, it's. The emperor was holding this watch in his hands. In peacetime, the awarding took place in Krasnoe Selo, and the monarch personally presented each watch. Thank You and Good Luck!!! Brief History: Patek Philippe Watch Company. Patek Philippe is one of the oldest and longest-standing watch companies.

In nearly two centuries of business, theyve pioneered countless pieces of technology. These innovations have contributed to the advancement of modern watchmaking and resulted in some of the finest timepieces ever made.

Patek Philippe is regarded as one of the worlds premiere watchmakers. Their watches are known for sophistication & elegance. When it comes to impeccable craftsmanship, pioneering designs and rich history of Genevan watchmaking inventions, there is none more qualified than that of Patek Philippe. The company began its legacy in the nineteenth century, founded by Antoine Norbert de Patek and Adrien Philippe and has a tradition of innovation that has been crowned by over one hundred patents.

The brand is renowned for its hand-finished watches and skilled craftsman that ensure each and every timepiece is of the highest of standards. Before their formation, both Patek and Philippe were on their own journeys within horology.

As a driving force when it came to his inventions, and he received a bronze medal for his keyless winding and hand-setting system at the Industrial Exposition in Paris. He applied for a patent of this design and garners the attention of many, including Queen Victoria. In 1851, both watchmakers came together to begin the brand Patek, Philippe & Ce- Fabricants à Genève, the start of the brand we know today.

Their career spanned decades, and they continued to supply timepieces for royalty and aristocrats, among others. New patents for their timepieces included one for a precision regulator, perpetual calendar mechanisms for pocket watches and for the first double chronograph. He continued to focus his energy on his successful partnership with Tiffany & Co. He also traveled to cities all around the United States until he accumulated orders for 150 watches.

His persistence and perseverance made a lasting impression on Tiffany & Co. Ever since, Patek Philippe has maintained this highly regarded reputation. This resulted in the creation of the Duke of Regla Westminster chime pocket watch in 1910, the first complicated ladies wristwatch with a five-minute repeater in 1916, the first split-seconds chronograph wristwatch in 1923, and its first wristwatch with a perpetual calendar in 1925. The world, and subsequently the company, took a great hit within the Great Depression and sought outside investment to counteract it and in 1932, Genevan brothers Jean and Charles Henri Stern invest in Patek, Philippe & Cie.

In the same year, the Calatrava: Ref. A watch so revered that it is still part of the Patek Philippe collection today in an updated form as model 5196. From there, many more iconic timepieces were created, and patents filed. Expanding the Brand to America. For the next few years, they continued with Pateks business model, serving their high-class clientele. However, Patek knew that the brand needed to think bigger and grow their international reputation. So, in 1851, he traveled to the United States and began working with Tiffany & Co.

This partnership has continued to this day. The brands aspirations to build their international presence quickly paid off. In 1853, Patek Philippe participated in the Exhibition of the Industry of all Nations in New York City. There, they received a silver medal. Just two years later, the brand received another silver medal at the Worlds Fair in New York City.

In over 180 years of business, Patek Philippe has nearly 100 patents to their name. Throughout the Patek Philippe history, they have created timepieces for kings, queens, and other iconic figures from all over the world, like Queen Victoria and Prince Albert. In addition, the relative scarcity of Patek Philippe watches makes them even more desirable. Each watch takes about a year to complete, while some of the more complicated models can take almost two years.

Because the company only produces a limited number of each model, only a select number of people are able to own a Patek Philippe watch. Still, its likely their timeless style that makes Patek Philippe so noteworthy. The brand has built a reputation of creating some of the most elegant, sophisticated, and attractive timepieces on the market. In summary, a person who buys a Patek Philippe watch is someone who wants invest in a timepiece that will last for years to come, embodying the spirit of the brand, You never actually own a Patek Philippe, you merely hold it for the next generation.

The item "Mega Rare Antique Patek Philippe Chronometro Gondolo 18K rose gold pocket watch" is in sale since Wednesday, June 30, 2021. This item is in the category "Jewelry & Watches\Watches, Parts & Accessories\Watches\Pocket Watches". The seller is "ticker-ticker" and is located in Mount Arlington, New Jersey. This item can be shipped worldwide.