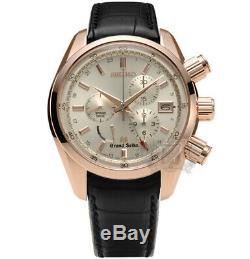 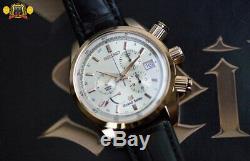 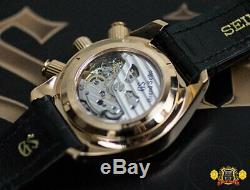 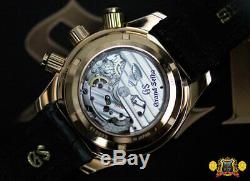 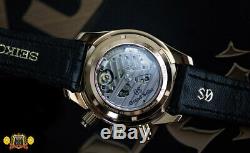 Purveyors of Fine Watches And Luxury Products Since 1995. Grand Seiko SBGC004 Spring Drive Chronograph 18k Rose Gold Rare Watch. MOVEMENT Drive system Spring Drive CASE 18k Pink Gold DIAL Skeleton silvered color dial. Arizona Fine Time is extremely proud to bring you a hands on review of a Grand Seiko that, while it has been out for a number of years, has never before been seen in the US market. One of the finest utilitarian movements in the Grand Seiko line up is their 9R86 Spring Drive Chronograph GMT, with 416 components, 50 jewels and a power reserve of 72 hours, including standard use of the chronograph feature and using only one barrel. Take this incredible caliber, and house it inside an immaculately mirror finished, 43.5mm 18k pink gold case. We now introduce you to the incredibly rare and luxurious, SBGC004.

Seiko's history with self-winding mechanical chronograph's is extensive. Japan's first chronograph was made by Seikosha in 1941, a pocket watch that could record time intervals up to 30 minutes. They debuted their first self-winding wrist watch chronograph in 1969, which could arguably be one of the worlds first.

Three self-winding chrono's were released that year, the Caliber 11 by Heuer, the El Primero by Zenith/Movado, and Seiko's 6139. Seiko executed a precise measuring instrument, which was the worlds first to utilize a vertical clutch and column wheel system. This allows for a continuous roll into the chronographs performance when starting as opposed to jumping due to the vertical clutch, and a solid feeling, precise start, stop and reset action due to the column wheel. This movement also included their "Magic Lever System" (created in 1959) to provide a more efficient winding system. Since the debut of the 6139 in 1969, Seiko has only used these systems in their luxury mechanical chronographs.

Among other achievements in precision measuring devices such as creating the first quartz watch in 1969, Seiko also developed the worlds first analog quartz chronograph in 1983. I mention this relative to the later achievement of Spring Drive, the hybrid best explained as a quartz regulated mechanical movement.

From its conception by young engineer Yoshikazu Akahane in 1977, Spring Drive was destined to be the worlds most accurate watch powered by a mainspring. The concept was inspired by a bicycle rolling down a hill and using the brake to control the speed. With Spring Drive, the mainspring is your sole source of power, and unwinds in a barrel much like any other mechanical watch. As the spring unwinds, the energy is transmitted to the gear train to move the hands, but also becomes a source of electricity. At the end of the gear train, the power relayed over from the mainspring spins a gliding wheel/rotor that generates the minute amount of electricity to power an integrated-circuit and a quartz crystal. The development of the IC itself was incredible, and only requires 25 nano watts (1 nano watt is one billionth of 1 watt) of power to operate. In a traditional mechanical watch, the mainsprings unwinding is controlled by a wheel rocking back forth on a small spring called the hairspring. The swinging motion creates the fluttering of the second hand and the spring itself is one of the most sensitive parts of the movement. In Spring Drive, the wheel is instead controlled by an electro-magnetic brake that makes no contact with a uni-directional gliding wheel, and gets the timing information from the quartz crystal translated through the IC allowing the glide wheel to rotate exactly 8 times per second. The wheel spinning in only one direction and being braked with no contact creates the beautiful glide of Spring Drive, along with maintaining quartz like accuracy of +/- 15 seconds per month. The journey to creating Spring Drive was a lengthy one. Akahane was employed by Suwa Seikosha in 1971 as a technical specialist.

It was 1977 that the thought of creating this quartz regulated mechanical movement, with the first prototype finalized in 1982. The second prototype was not until 1993, with the next arriving in 1997. At Basleworld Fair in 1998, the announcement of the manual wind Spring Drive was official. 1999 was the year that Spring Drive hand-wind was available for sale in limited edition form in the Seiko and Credor brand.

1999 was also the year of the first self-winding prototype which followed with a second in 2001, and in 2003, a third. In 2004, the Spring Drive automatic finally debuted with a 72 hour power reserve to be delivered in 2005. The addition of a widely popular complication to Spring Drive did not occur until 2007, which was the chronograph along with a GMT feature. The evolution of Spring Drive from concept to reality was extensive, involving over 600 variations of prototypes, 230 patents and 28 years of development. The chronograph movement not only debuted in the international collection of Seiko Spring Drive through limited edition SPS001 with the 5R86, but 2007 also marked the first year a Spring Drive Chronograph movement debuted in Grand Seiko, labeled the 9R86. The SBGC004 is actually the third Grand Seiko chronograph ever produced. Seiko's perspective on the use of a chronograph in Grand Seiko could only be the worlds most precise. This function is something that needs the utmost precision, and Grand Seiko's chronograph was required to exemplify this. The item "Grand Seiko SBGC004 Spring Drive Chronograph 18k Rose Gold Rare Watch" is in sale since Thursday, June 13, 2019.

This item is in the category "Jewelry & Watches\Watches, Parts & Accessories\Wristwatches". The seller is "azfinetime" and is located in Scottsdale, Arizona. This item can be shipped worldwide.